The first woman to perform space flight was a Soviet woman cosmonaut Valentina Tereshkova. She made a space flight alone from June 16 to 19, 1963, on the spacecraft Vostok-6. She remains the only woman to make a space flight alone, all other women flew into space as an member of crews. The Soviet woman Svetlana Savitskaya also became the second female cosmonaut. The third female astronaut was the first American female astronaut Sally Raid.
Total for September 1, 2022, 69 women flew into space. Of these, 54 are women from the USA, 5 from the USSR/Russia, 1 from Great Britain, 2 from Canada, 2 from Japan, 1 from France, 1 from South Korea, 2 from China and 1 from Italy. Helen Sharman from the Great Britain and Yi So-yeon from South Korea are first cosmonauts their countries. The first woman to carry out two space flights was the Soviet woman-cosmonaut Svetlana Savitskaya. The first woman to do three, four and five space missions, became an American woman astronaut Shannon Lucid. On January 1, 2019, six American women astronauts carried out five space missions each.
The most long space flight was made by an American woman astronaut Christina Koch: 328 d 13 h 58 m (7885 ч 58 м). The second for a long space flight made Peggy Whitson: 289 d 5 h 1 m 30 s (6941 h 1 m 30 s). The third for a long space flight made Italian female astronaut Samantha Cristoforetti: 199 d 16 h 42 m 46 s (4792 h 42 m 46 s). This flight of Cristoforetti is the longest space flight among astronauts not from the USSR/Russia and not from the USA.
The largest total space flight time has Peggy Whitson, which made three space flights: 665 d 22 h 22 m 58 s (15982 h 22 m 58 s). Peggy Whitson’s cumulative time is also the largest among of all American astronauts.
The first woman to do the EVA was the Soviet woman astronaut Svetlana Savitskaya. On July 25, 1984, Savitskaya entered in the open space from the Salyut-7 station. The first American woman to do the EVA was Kathryn Sullivan - on October 11, 1984, she left Space Shuttle Challenger STS-41G. In total, 19 women went into outer space. The largest number of exits was made by Peggy Whitson - 10 exits with a total duration 60 h 21 m 0 s.


Number of female astronauts by country:

Yelena Serova and Samantha Cristoforetti on the ISS. 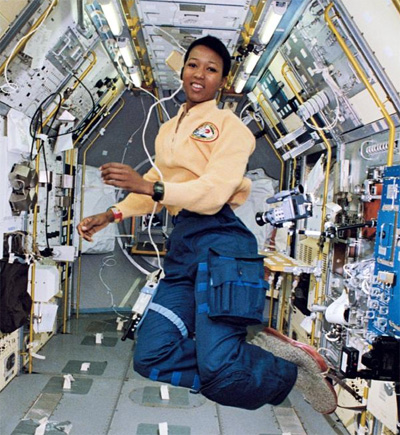 Mae Jamison on board the shuttle Endeavour.